Joomla 3.4 was released this week and it arrives with new features for both end-users and developers.

End-users will find it easier to find and edit modules, because they can now do that fully from the front-end.

Developers will enjoy the integration with Composer and the ability to release different versions of their extensions to different user groups.

The Joomla team want to create a lighter core. The first step in this process is by removing extensions that aren't widely used, such as Weblinks, and making them optional.

Weblinks has been removed from the core and moved to the Joomla! Extensions Directory (JED) as official extensions. If you already have Weblinks installed, it won't be removed. But, if you want to use Weblinks in the future, install it from the JED.

Here's the Github link for more details. You can expect more extensions (Newsfeed and Banners are prime candidates) to move to the JED with future releases.

For users, the most popular new feature in Joomla 3.4 will be front-end editing.

You can click on any module and edit it easily - no more hunting around in the admin area. Here's the Github link for more details.

Watch this video to see front-end editing in action:

This is a feature that developers will love. Composer is a package manager for PHP. What does that mean in plain English? It means that Composer makes it easier to integrate external code libraries into Joomla.

Composer is a really popular product that's widely used in the PHP community. You can find a list of all the libraries that Composer supports at Packagist.org.

Click here to find out about Composer and Joomla and here's the Github link for more.

People love to hate Captchas which are often clunky and hard to use. Plus, traditional captchas failed to protect you against spam.

So, in 2014, Google introduced what it called no CAPTCHA. This makes captchas much easier to use - a significant number of users now only have to check a box, rather than solving a puzzle. No Captcha is now available in Joomla 3.4. Here are the Github links for more details.

Watch this video to see No Captcha in action:

Malicious file uploads are one of the most common ways to hack a site. Joomla 3.4 now has "UploadShield" code which can detect most malicious uploads by examining their filenames and file contents. This feature is an adaptation and improvement on work done in the popular Admin Tools extension.

The Joomla core has long allowed users to choose whether they want to update to Beta versions (for testing) or just to stable versions. Now extension developers can do the same for their extensions by adding a tags attribute to their update server manifest.

Then they can ask their power users to test upcoming releases by using these steps:

You can now make many Joomla 3 admin screens full-width by hiding the sidebar: 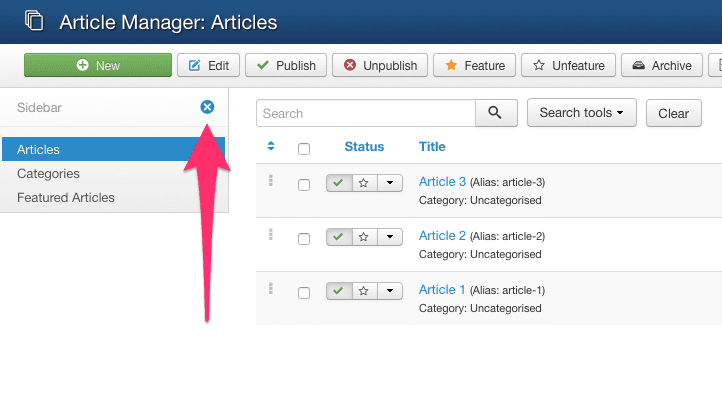 Other improvements in Joomla 3.4