Matomo: The Best Alternative to Google Analytics for Joomla

Over the last year or so, we've heard from more and more people who want to drop large, centralized services such as Google Analytics.

The most common reason is privacy. People want to stop sharing so much data with Google. I suspect this is partly driven by a new focus on privacy and data protection laws. But increasingly, many users just don't trust Google.

Another reason is simplicity. The Google Analytics interface is increasingly busy and people often want easier access to important trends.

So recently, we asked you what analytics tools you use with Joomla. One reply kept coming up time and time again: Matomo.

If you're serious about data privacy, it's worth looking at alternatives to Google Analytics. Matomo has several helpful pages explaining how they are different.

Here's an introduction to Matomo, together with a guide on using it with Joomla.

With Matomo, the philosophy around data ownership is simple: you own your data, no one else. Matomo is probably the leading open alternative to Google Analytics.

Matomo was originally called Piwik and launched back in 2007. Now, thirteen years later, it has around 1.5 million users and over 1% of the analytics market.

There is a cloud version of Matomo, but you can also download and install your own copy. This page has self-installation instructions. Matomo is built with PHP and MySQL and has a visual installer. So if you can install Joomla, you can also install Matomo:

If you find a bug, Matomo is incredibly active on Github. I've seen some open source projects be on Github, but without much interaction with users. The Matomo are busy, with lots of activity in the issue queues, and new releases every few days.

Just like Google Analytics, you will get a Javascript snippet that needs to be added to your site.  If you want to use Matomo with Joomla, you can use Shack Analytics and follow this guide. 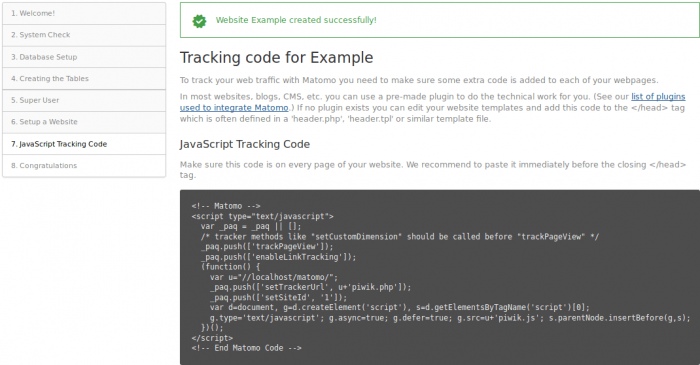 In my testing, I've found Matomo to be easier than Google Analytics and there weren't any features I missed. There are even some things that Matomo does better, such as these individual user profiles: Unlike many open source products, Matomo has a really good mobile app that's available for both Android and iPhone: If like what you see, there's even a data importer so you can move your historical data from Google to Matomo.

Do you have any experience with Matomo? If you've used Matomo on your sites, would you recommend it to other Joomla users?