Ever since the release of new versions after 1.5, there have been a lot of questions as to how to migrate or upgrade. It is now a year since the latest series of Joomla releases started and we have now reached 2.5 which will be supported by the Joomla project for a long time. It's a great time to upgade.

This guide will take you step-by-step through the general procedure of how to migrate to Joomla 2.5.

Please read through all the material as this is not a light undertaking.

Joomla 1.6 took three years to develop, and lasted for six months before 1.7 was launched for second six-month period. The numbering system has been changed and now the stable release starts with 2.5 to match Joomla 1.5.

Countless hours have been spent by many volunteers from around the world to put it all together. Although much of the code is the same from Joomla 1.5, much of it has been written from the ground up, and the changes are comparable to the changes from Joomla 1.0 to 1.5.

Because the changes from Joomla 1.5 to 2.5 are so large and because of the massive effort put into getting Joomla 2.5 to where it is today, there is no core upgrade path, this is indeed a migration.

In planned future releases of Joomla (which will be released every 6 months), the changes from version to version will be more incremental and a core upgrade path is planned. Now that Joomla 2.5 is finally here and stable, a community initiative led by the developers of Joomla is turning towards jUpgrade (a 3rd party Joomla extension on the JED originally developed by Matias Aguirre) for help and to help.

Many of Joomla's developers (who are all volunteers that freely contribute their time) are volunteering to put the finishing touches on jUpgrade.

jUpgrade allows you to migrate from Joomla 1.5 to 2.5.

Please, please save yourself (and possibly your clients) a lot of headaches and make sure that your server (and in the case of jUpgrade, your browser too) is up for the task.

The system requirements of Joomla 2.5 can be found here after the official release date:
https://www.joomla.org/technical-requirements.html

Before You Get Started

Before you get started, there are a few things that you are going to have to check and/or think about:

The two main features of Joomla 2.5 that make it superior to Joomla 1.5 are: Access Control List (ACL) and nested categories. Gone are the days of simply having guests, registered users, authors, and editors, without being able to specify what they can and can't do in the frontend. Also, with 1.6 you can have more flexibility of organizing (and therefore displaying) your content with nicely organized categories within categories. No more being restricted to the section >> category structure. Those are all great things to have (especially the ACL), however, for many 1.5 users, it isn't needed. The main point is to decide for yourself:

For a massive list of changes during the initial move to Joomla 2.5, please see: https://docs.joomla.org/What%27s_new_in_Joomla_1.6 which was the first implementation of the new features. For changes during the more recent move to 2.5, read this blog post.

Skipping this part is perhaps the biggest mistake you can make. If you have a proper backup (or several) you can always revert back if needed. However, if you don't properly backup your site and something goes wrong, you are going to waste a lot of valuable time, and sometimes a lot money, getting things back to the way they were. So please backup!

If you don't know how, please see steps 1 through 5 in this tutorial.

Download the latest version of jUpgrade. Start at the Joomla Extensions Directory listing. In January 2012, the most curent version is jUpgrade v1.2.4

If you are really nervous by this point and your heart is beating fast, then you should probably set up a testing environment. You can follow this tutorial to make a copy of your site to test on your localhost or another remote server. 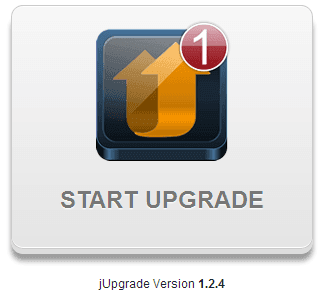 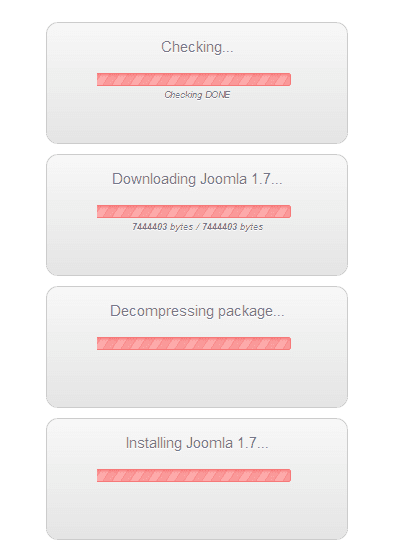 Do not exit the screen until everything has finished loading. Scroll down to check if it has finished. (Since we're writing in advance of the 2.5 release, the screen shot reflects the 1.7 results.) 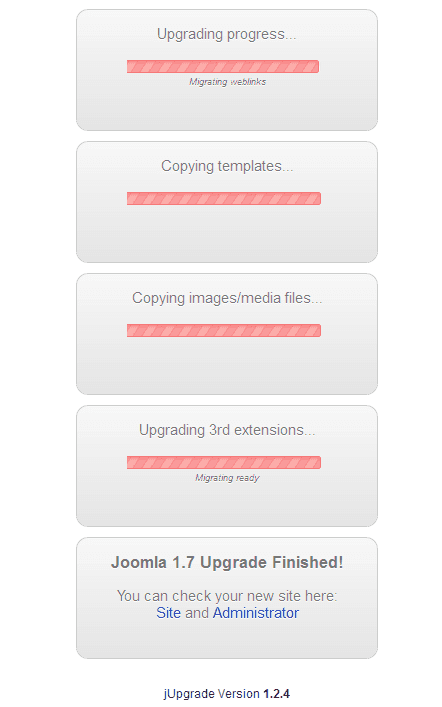 Since jUpgrade was first released, they have made a number of really great improvements. It now migrates your modules and templates, and you can see the results in the progress screen. We suggest you do a thorough check of each one to make sure they have upgraded properly.

As explained in the background information, the changes from Joomla 1.5 and 2.5 are quite significant. The fact that jUpgrade creates a new Joomla 2.5 installation for us is, in my opinion, pure genius. If the migration process was not 100% successful, your Joomla 1.5 is still perfectly intact and none of your users are affected. You have an opportunity to check out your site both in the frontend and the backend to make sure everything is up to par.

So what actually happens? jUpgrade downloads the latest version of Joomla 2.5 for you to the jupgrade directory (which it creates) in the root folder of your Joomla 1.5 installation. It then extracts all the files from the download. Once extraction has completed, jUpgrade installs Joomla 2.5 and then proceeds to migrate your old database to the new Joomla 2.5 database which it has created.

Your Joomla 2.5 site will be installed in www.example.com/jupgrade assuming that your Joomla 1.5 installation is in your html root.

Please do a full site review of your Joomla 2.5 installation and make sure everything is set up properly.

Your Joomla 2.5 site will be installed in www.example.com/jupgrade assuming that your Joomla 1.5 installation is in your html root.

Here is a general checklist of items to test:

If everything looks good to go, then let's backup the new Joomla 2.5 installation. Read this tutorial to learn how to make backups.

Overview of the Rest of the Process

Quick overview of what we are going to try to do now:

*****It should happen in this order***** If you do it in reverse order, the Joomla 2.5 files will get mixed with the Joomla 1.5 files (many of 1.5 files will be overwritten) and you will have a big mess! Your site will likely still work, but it's a security ticking time bomb waiting to go off.

Next log onto your host's file manager (e.g. cPanel, Plesk, etc) or an FTP Client, however, preferably a file manager.

The general procedure is (it should take about 30 seconds if you review the steps before you start):

You can use this tutorial to guide you through the process.

How you can contribute and help!

Creating an extension as significant as jUpgrade requires an enormous amount of time and effort considering the major structural changes between Joomla 1.5 and 2.5. Add to this the fact that starting with release of Joomla 2.5 betas, the extension would have to be modified to work with the new changes between releases, and all of a sudden it's too hard for any one person to complete in a short period of time (especially when you are not being paid).

With this being said, it's time to step up and make a difference, whether big or small. Have you profited from Joomla in the last year? Are you excited about the future of Joomla? Would you like to contribute back and show your gratitude? Now you can in this project!

We, as part of the Joomla community, are calling on the entire Joomla community to help out in whatever way you can. You don't have to be a master developer, just go through this tutorial on a test site and if you come across any bugs, report it. If you know how to fix it, create a patch for it. If you are a master developer, step up to the challenge. You can report bugs here: https://redcomponent.com/forum/92-jupgrade.