Would you like to know how to build your own Joomla blog like the one we have here at JoomlaShack?

Joomla is a powerful and flexible content management system. It has blogging features built into its core. So, why wouldn't we use them?

In this tutorial, I'll show how you can build a Joomla blog just like the one we use here at JoomlaShack.

Read more: How to Create a Blog in Joomla Like This One at JoomlaShack

A number of our students have had an error message occur inside Joomla:

Here's how the error message appears inside their Joomla administrator area:

Read more: How to Fix the "Cannot write to log file" Error in Joomla

How to Use K2 Sub-Templates in Joomla

Joomla provides you with a powerful and safe way to override your site's default HTML layouts.

Why does it matter to you? Making changes to Joomla's core files is often necessary.

The wrong way is to directly edit Joomla's files. If you do, you'll lose all your changes when you next update your site.

The right way is to use an override. You can place copies of any layout file into your /templates/ folder. Joomla checks this folder first before loading the original files and if it finds these files present, it uses them instead of the core files. If you're new to using overrides, check out OSTraining which has 13 great tutorials on using template overrides.

Read more: How to Use K2 Sub-Templates in Joomla

How to Check The Joomla Version Via the Files

Your new client has an emergency. Their site has been down for two days after they tried upgrading and they can't log into the admin. They can't figure out how to fix it and need your help.

Thankfully, you've learned Reset Core Files trick. But, since it's a new client, you're not certain what their version is and they haven't respond to your latest email. So what do you do now?

This tutorial will show you a quick way to figure out the Joomla version via the files. Let's get started.

Read more: How to Check The Joomla Version Via the Files

How to Remove .html in Joomla's URLs

One Joomlashack University student was wondering how to remove the .html at the end of his URLs.

This tutorial will show you how to do that and provide a useful SEO tip.

Read more: How to Remove .html in Joomla's URLs

A New Version of Joomla 3 Explained is Coming 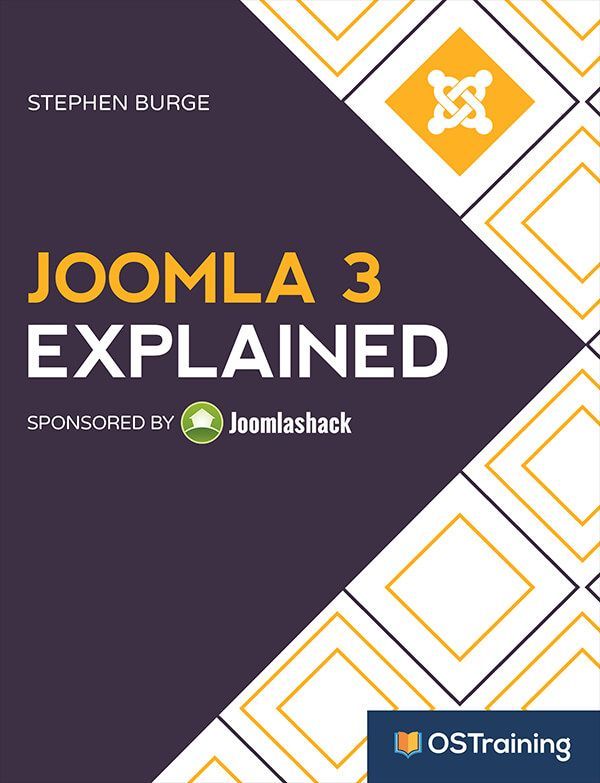 The team behind Joomlashack wrote the most popular Joomla books.

These books sold well over 10,000 copies each. However, we haven't been able to release an update in recent years. Finally, that's going to change.

Why release a Joomla 3 Explained update?

There are several good reasons to release a new version now:

Read more: A New Version of Joomla 3 Explained is Coming

This week we released OSYouTube Free and Pro plug-in versions 3.3.3.

Civic 2, a New Version of Our Joomla Video Template

We released a new version of Civic, a Joomla template that's perfect for several types of websites, especially those that rely on video.

Many video displays are hard-to-configure, so we focused on making Civic as simple as possible. Especially for Civic, we added a new "mute" feature in the OSYouTube plugin. This makes it easy to have a beautiful, and silent, video on your homepage.

Additionally, Civic is now compatible with the very last version of the Wright framework.

How to Migrate Joomla Comments Away from Disqus with CComment

Did you start seeing sponsored ads above and below your Disqus comments on your Joomla based site recently? If you did, then it means that Disqus, without your permission, has included your site in their advertising program Reveal. We first wrote about this in "How to Opt-Out of Disqus Reveal".

The only alternative Disqus provides to avoid ads is to pay them $10 a month. But what if you don't want to? Fortunately, it is possible for Joomla users to migrate your comments away from Disqus.

In this tutorial, I'll show how you can move your Disqus comments to the CComment extension, created by Daniel Dimitrov at compojoom.com.

Read more: How to Migrate Joomla Comments Away from Disqus with CComment

Learn in this checklist how you can protect your Joomla based web site by developing and fostering appropriate security mindset, even if you are not tech savvy. Equipped with this checklis, you can start fine tuning your Joomla site security right away.