Joomlashack's 2018 Review and Thank You

Thank you for your support of Joomlashack.

Joomlashack started in 2005, but our team took over the site in 2016. It's been a busy couple of years as we re-launched Joomlashack.

The re-launch has been possible thanks to many of you. We really appreciate your support.

Here's our recap of the good and bad in 2018 (If you're interested, here's 2016 and 2017). Hopefully this isn't a lame "everything is awesome" post. I'll try and give you honesty and insight into Joomlashack's year. Oh, and read down to the comments for a chance at a special prize!

This was the major news at Joomlashack in 2018. A couple of years ago, we started to acquire Joomla extensions. That started with Tabs and Sliders from JoomlaWorks and JCal Pro from Anything Digital. This year, that trickle became a flood:

This made for a busy and stressful year:

But, all-in-all, adopting extensions has been successful for Joomlashack. This route leaves almost everyone happy:

Joomla Templates and the Wright Framework

Extensions are our primary focus, we're still improving our Joomla templates and the Wright framework. Wright now allows you to safely load extra Javascript through a custom.js file. In addition, Wright now has support for microdata and improved mobile menus.

Even though Joomla 4 isn't here yet, we spent a lot of time preparing for this new releases. Joomla 4 will bring substantial changes that impact templates. Here are some of the changes we've already completed so that our Joomla templates are ready for Joomla 4:

Joomlashack University got a reboot in December. All the videos are hosted here at Joomlashack, and if you pass the quizzes, you get Joomlashack-branded ceritificates. We're already looking forward to the new technology in Joomla 4 with the CSS Grid Explained book and Bootstrap 4 videos.

We've tried some things that ended up not being a great fit for our new direction. So, in 2018, we decided to stop extra development and maintenance. For a couple of years, Joomlashack customers could sign up for "Site Care" and have us look after their sites. We've now stopped the Site Care service.

From now on, Joomlashack is 100% focused on products, rather than custom services.

One extra, and very significant, adoption in 2018 was from one of our sister companies: OSTraining.

We've had been blogging about Joomla at OSTraining.com for about 10 years. We decided to move that decade of blog posts over to Joomlashack. The process was really easy thanks to the J2XML extension.

We either wrote or updated 209 blog posts, plus 191 documentation articles. Rather than focus only on new articles, we spent a lot of time updating old posts, particularly some of those from OSTraining.

Here's a list of the most popular new posts of last year:

Joomlashack is 13 years old now so there's a lot of historical data to look at. I had a feeling that we were becoming less reliant on the United States for customers, but the data confirmed it. About 50% of our customers come from the United States, but the rest of the world is catching up. Here's a comparison showing where the location of visitors to Joomlashack.com over the years. You'll notice that the list is increasingly dominated by European countries. 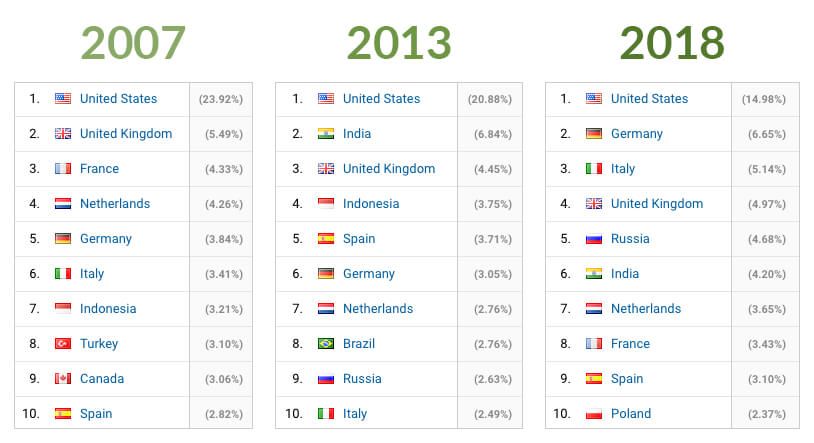 You saw that traffic to Joomlashack jumped in September. Was that reflected in the number of sign-ups?

In this next image, I've added arrows so it's easier to see the growth rates. You'll notice a period of slower growth from Summer 2017 to Summer 2018. That started to change when we moved the Perfect Web extensions to Joomlashack in June. After all, Shack Forms is #14 on the "Top Rated" list at extensions.joomla.org, so that attracted new customers.

The next image is an overview of how that larger chart breaks down. In November, we added 178 new subscribers, but lost 58 to churn. That left with us a net increase of 120 subscribers in the month. 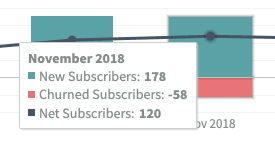 If I had to pick a major disappointment for Joomlashack in 2018, it would be the number of churned subscribers. Every time we gain three customers, we lose one. We need to do a better job of finding and solving the reasons why those people cancel.

Goal #1: The transition to Joomla 4. Yes, this is still on the list. Joomla 4 wasn't released in 2018, but we'll do our very best to help and prepare for a 2019 launch. Our goal is to ensure you, the customer, do NOT have to invest much time in updating to Joomla 4. We promise that Joomlashack extensions and templates will update easily to Joomla 4.

Goal #2. Integrate our extensions. For example, we can expand OSMap to provide support for all our new extensions. Or we allow people to pass marketing leads from Shack Forms to jInbound.

Goal #3. Improve the Joomlashack brand. There are a couple of pieces to this. First, the Joomlashack logo and word mark is looking old and it's time for a design refresh. Second, one of the downsides of adopting extensions is that the naming becomes really inconsistent. In 2019, I'd like to continue rebranding our extensions using the "Shack XYZ" formula. This means that OSYouTube will become "Shack YouTube", "OSCampus" will become "Shack LMS", and so on.

Let us know what you think in the comments below.! We couldn't do this without your support.

We'd love to hear what you want from Joomlashack in 2019. The best responses will get a 1 free year of Joomlashack's Everything Club.