Joomlashack's 2019 Review and Thank You

Thank you for your support of Joomlashack.

We've been running Joomlashack for over three years now, and at the end of every year we write a review. If you want to look back, here is our 2016 review, 2017 review and 2018 review.

Hopefully these are not lame "everything is awesome" posts. We try and give you honesty and insight into Joomlashack's year. Every year there are plenty of ups and downs.

At the beginning of 2019, we focused on rebranding Joomlashack. The old logo and color scheme were over 13 years old and badly needed an update.

We released a first round of logo ideas. In retrospect, I'm very glad we didn't go with the cycling bear! Mascots are really hard to do. It's tough to create a mascot that is warm and friendly, complements your site design, and doesn't look like a rehash of many other mascots.

We looked for mascots that would fit well with the "shack" part of "Joomlashack", but perhaps we were being too literal. Here's an early proposal for a Joomlashack bear. After all, bears can live in shacks, right? The bear idea ended up being too complex, particularly when we added a bike.

Our next serious attempt was a bird mascot. We worked on several birds, eventually focusing on a cockatiel / cockatoo. Those birds look really cool and also they originally come from Australia - just like Joomla. This was closer to what we wanted, but it ended up looking too much like a sports mascot.

We initially launched a new logo idea, but the feedback from Joomlashack customers wasn't positive. In particular, people really didn't like Roboto, which is the default font on Android phones. Our team mostly use iPhones rather than Android, so we didn't realize how tired and common that font can look.

At first glance, the feedback on the first logo was disheartening, but in the end I realized how lucky we are to have customers who cared enough to send great feedback.

We went back and kept working on the design process. It took another two months, but we finally agreed on a new Joomlashack logo.

That was incredibly stressful for all of us. For me as CEO, it was hard work to find and negotiate each deal. For our developers, it was difficult to bring over so much unknown code. For our support and documentation team, there were tons of new features to learn.

2019 was much quieter: we released two new extensions: Shack Article Manager and Shack Analytics. I love both of these extensions but I'm glad we didn't launch any more! By the end of 2019, we had finally completed the process of absorbing all the new extensions over the last couple of years.

Shack Article Manager is an extension that allows anyone to write, edit, publish and manage articles from the frontend of Joomla sites. 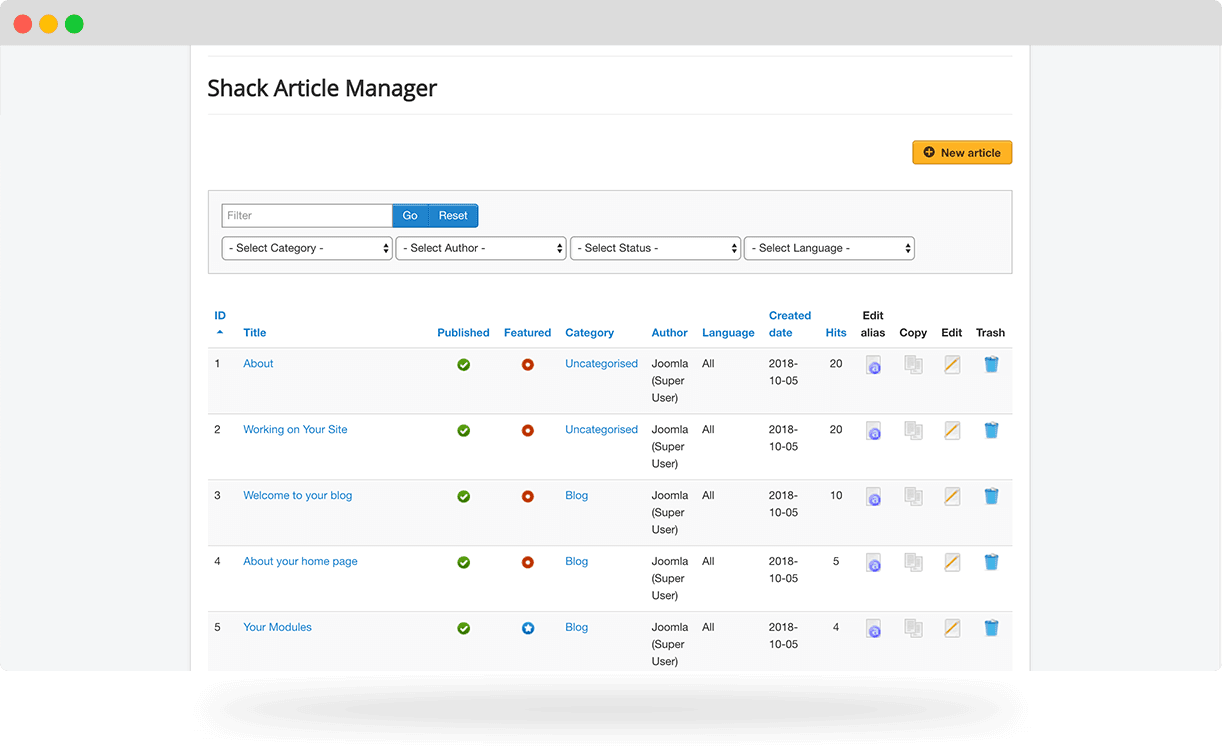 Shack Analytics is a single extension to manage all the analytics code on your sites. 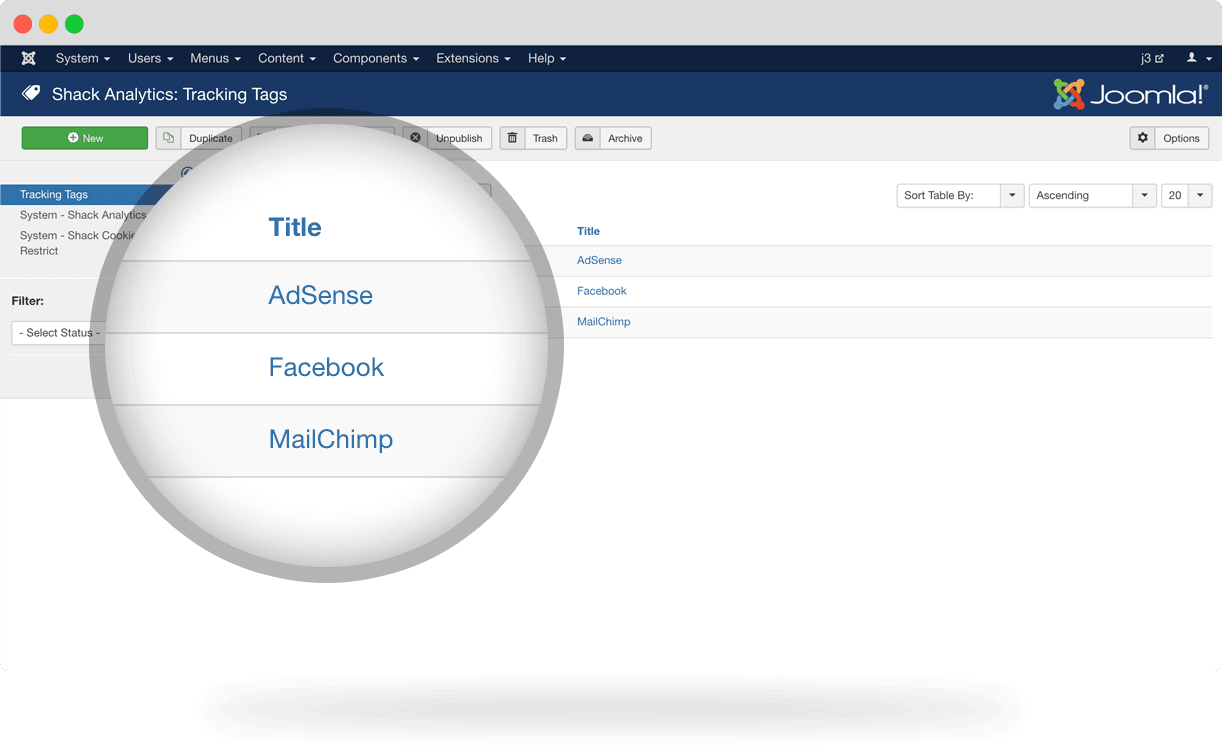 We held the Joomlashack Conference over three days in mid-November. This was a free conference featuring 20 of the best speakers from around the Joomla world.

This was the highlight of the year for me.

Originally, the Joomla World Conference was scheduled for early November. Sadly, the event was canceled because of uncertainty around Brexit. Holding an online event on the same days wasn't a perfect substitute, but it made sense to try and fill the gap.

I was amazed at how good the presentations were. We've edited all the videos and posted them to the Joomlashack YouTube channel. There's a single playlist for all conference videos.

We'll be back again with the Joomlashack Conference in 2020.

If you're short of time, I'd recommend watching one video from the conference: this introduction to Joomla 4 by George Wilson.

We've focused hard on explaining Joomla 4 and what you'll see in the new version. Here's a recap of our Joomla 4 posts:

There was also excellent material on Joomla 4 during the Joomlashack Conference:

We expect the Joomla team to release Joomla 4 during 2020, and when they do - we'll be ready.

There are some simple explanations for this slower percentage growth:

I can't pretend to be happy with our growth in 2019, but we did get some important work done. Our developers worked to improve the codebase of the some older extensions that acquired. And our support team worked hard to fill in all the gaps in our documentation.

This image below shows our subscriber growth since taking over. We're now just over 2,700 active subscribers:

This second chart shows our monthly revenue growth. We're still heading upwards, but 2019 was our slowest year so far.

On the positive side, our traffic grew this year. We nearly had as many visitors as 2017 and 2018 combined! 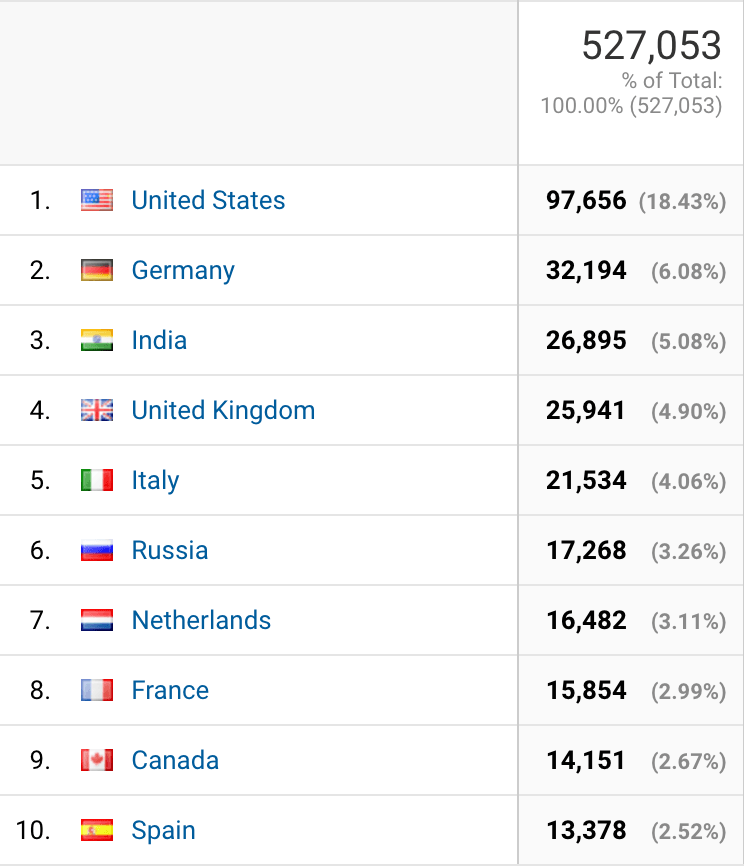 It's definitely not easy to build a strong and sustainable business in Joomla. The platform is over 13 years old and the user-base is active, but not growing quickly.

We've managed to grow Joomlashack every year since taking over. We did that by moving quickly and taking some big risks, particularly with acquiring other Joomla companies.

The slower growth in 2019 reflects the fact that we played it safe. That's going to change in 2020. We're going back to making big moves.

First, we will finally release the eCommerce platform we've been promising for a couple of years now. This will not be a full eCommerce product to compete with Hikashop, J2Store and others. This will be a reliable, easy-to-use extension that focuses on online products and subscriptions.

Second, Joomla 4 will bring some big changes to our business approach. Before we took over in 2016, Joomlashack was famous for templates and training. Since then, we've concentrated on extensions. In 2020, our focus will evolve again. Stay tuned for an exciting new chapter for Joomlashack.

Thanks for using Joomlashack and Joomla over the years.

Let us know what you think in the comments below! We couldn't do this without your support.